In Laman's Terms: Why Use Animation For Just Realism? 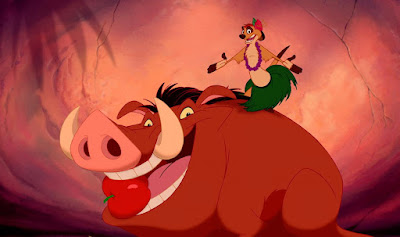 We're about nine days out from that new Lion King remake (which is not live-action, for the love of God, it is an animated movie) hitting theaters everywhere and boy do I have mixed feelings about the project based on its marketing. I'm heading into the film with an open mind and hope that it can surprise me just like The Jungle Book and Pete's Dragon did, but much of what the trailers and commercials have shown off so far don't get me all excited. Right now, The Lion King is being marketed to look basically like the original animated film but now it's done in an animation style placing an emphasis on a much more muted color palette and far more realistic animation.


The latter element is so emphasized in the character designs that countless jokes have already been made on the internet about how the new versions of Simba and company seem to have trouble making any kind of distinct facial expressions like the ones that the characters in the original hand-drawn motion picture could do with ease. Trouble with communicating characters inner thoughts through facial expressions is just one curious difficulty with the art of photorealistic animation. This is a process that's taken years to perfect as, for so long, computer-animation just wasn't capable of making images or characters based on actual reality look convincing. This didn't just apply to photorealistic animation like the one seen in the new Lion King movie, it also applied to even stylized depictions of creatures from the real world.
That's why it took so long for PIXAR to make a movie starring human characters, their earliest human characters (like the baby in Tin Toy) looked disturbing rather than emotionally engaging. It was better to just focus on cartoony depictions of non-furry characters like the bugs in A Bug's Life or the toys in Toy Story! But computer-animation did grow over the years, especially thanks to the motion-capture technology used for CGI characters like Gollum in live-action films such as Lord of the Rings. By the time the 2000s ended with James Cameron's box bonanza and CGI technology groundbreaker Avatar, it was clear that the technology had come far enough for wholly CGI worlds to be crafted without ending up in Tin Toy territory.

Unfortunately, instead of such technology breakthroughs increasing an appreciation for the artform (not genre!) of animation, it instead led filmmakers to basically distance themselves and their works from being referred to as "animated movies" since those are unfairly widely seen as just inferior children's stuff. It's a real shame, the likes of Life of Pi or Gravity have merged heavily animated sets and supporting characters with live-action lead characters in a manner that echoes classic animated touchstones like The Fabulous Baron Munchausen, yet the people involved in those productions wouldn't be caught dead referring to them as animated movies. The technology for animation has gotten more and more sophisticated but stigmas associated with animated filmmaking have tragically stayed the same.

Part of the way filmmakers intend to make sure their projects aren't seen as traditional animated features is to place a heavy emphasis on realism. Sometimes, this does suit a specific story better. Gravity, for instance, is an intense thriller whose tone and story do call for a realistic depiction of outer space. But in a number of cases, hewing to realism tends to be a hindrance to stories rather than a benefit, particularly in the case of the recent slew of live-action Disney remakes. These films tend to take beautiful hand-drawn animation character designs and then drag them into the world of realism to the detriment of both the new character designs and the remakes themselves. For instance, this year's Aladdin remake decided to make the titular characters primate sidekick Abu a realistic-looking capuchin monkey yet also decided to make that same primate do silly cartoony comic relief antics, which just didn't gel properly with his design.

This was even more apparent in 2017s Beauty and the Beast, which made Lumiere, Cogsworth and the other enchanted objects in the Beast's castle extremely realistic looking but also decided to make them still sing and dance like they did in the original cartoon. The more flexible designs of Cogsworth and friends in the 1991 hand-drawn motion picture made it a breeze to also have them engage in elaborate dance choreography. Watching a realistically rigid teapot and clock try to do the same sort of dancing resulted in a weird case of visual dissonance. It was like Beauty and the Beast wanted to have its cake and eat it too, it wanted to seem like a "serious" production so it went for realistic character designs yet it also wanted to stoke nostalgia in viewers so it engaged in stylized musical numbers its character designs can't do properly. The character designs were at odds with what the film actually need as they chose to try and avoid the stigmas associated with classically unrealistic animation at the expense of their actual film.
Realistic animation has its place, let's make that clear, it's not inherently a bad thing. It all just comes down to the execution of realistic animation and especially what kind of story it's being placed in. That being said, the widespread emphasis on using modern-day animation technology heavily for animation that merely replicate everyday reality rather than create something new and exciting that could only be done in animation feels like such a waste to me. All of the rich possibilities of the medium of animation being tossed out in favor of just hewing to creating what you could see just by looking out your window. It's especially disappointing since modern-day realistic computer-animation is widely used as a way to give the impression of a movie finding a shortcut to so-called mature storytelling as a way of avoiding the aforementioned stigmas of children's entertainment associated with traditional animation methods. It's like when superhero movies went through their grim n' gritty phase, it's a medium of storytelling trying to achieve depth through superficial means rather than actually engage in substantive storytelling.

Just look at how nobody involved with this new Lion King movie dares refer to what the feature actually is, an animated movie. The term "animated movie" is thought of as derogatory and is avoided by films like Lion King or Gravity that use heavily realistic animation for the majority or entirety of their stories. Such a thought process is quite insulting as it implies that animated features or characters created in a more unrealistic manner aren't capable of telling thoughtful storytelling. Personally, I'm more interested in animation that's as detached from reality as possible that still manages to get my emotional investment. Such an achievement is on full display in Fantastic Mr. Fox, a movie whose opening scene of Mr. Fox leaning against a tree makes it clear the films stop-motion animation style has no interesting being realistic. The smoothness of modern-day LAIKA stop-motion is non-existent here as characters here jerk around between frames while the elaborate costumes given to the woodland animals in the cast further separate Fantastic Mr. Fox from the real-world.
This is a visually extraordinary movie that uses the tools of stop-motion to create a visual style that feels unlike anything else I've ever seen even in the other works of Wes Anderson. Instead of trading away substance for style, though, Fantastic Mr. Fox makes its cartoony characters distinctly human creations. Upon revisiting this movie for the first time in years earlier this year, I was stunned by how moved I was by a simple scene of Mr. Fox recounting to his troubled son, Ash, about when he was first told by Mrs. Fox that they were expecting a cub. Mr. Fox recounts how he and his wife contemplated all the possibilities of who this kid of theirs would be before placing his hand on his son's shoulder and simply telling Ash "I'm so glad that cub was you".

In this intimate sequence, Fantastic Mr. Fox wrings an emotionally potent father/son moment using characters that throw any concept of realism to the wind. Moving drama emerging from animation that defies realism is also found in abundance in the best movie of 2018, Spider-Man: Into the Spider-Verse. Populated by characters animated to have lines across their faces in the style of old comic books, Into the Spider-Verse tells a beautiful coming-of-age story whose one-of-a-kind visual style enhances the pathos of its story rather than serves as a hindrance. Can you even imagine the iconic What's Up Danger? scene being done in a "realistic" fashion? All of the unrealistic touches, like the on-screen "Woooo!" text, help accentuate the sensation of joy Miles feels in finally becoming his own version of Spider-Man. It's a wondrous sequence that serves as a testament as to the kind of emotional power one can drum up when using the limitless tools of imagination instead of running away from them in the name of realism.
Really, one could go on and on for eons on the examples of highly stylized animated films that manage to also evoke potent emotions out of the viewer (so many of the works of Hayao Miyazaki fall under this umbrella). While so many modern movies are concerned with using animation to emulate reality to create "serious" storytelling, animation has been proving for decades that crafting thoughtful storytelling and utilizing animations stylized tendencies aren't mutually exclusive goals. Here's to hoping that next weeks Lion King remake is one of the better examples of realistic animation being employed for a story as well as hoping that, in the future, filmmakers will be more open to embracing the visual qualities that make animated storytelling special. Wouldn't that just be cussing brilliant?
Posted by Douglas Laman (NerdInTheBasement) at 7:00 AM