Time Travel Is A Cruel Mistress 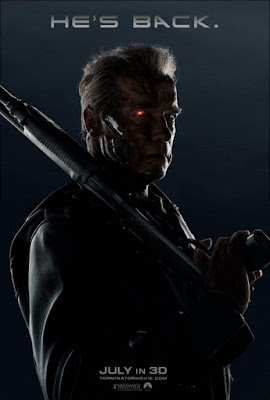 Remember the opening of The Terminator, where a singular block of text alerts you to the most basic facts about this universe, and then lets an air of mystery hang over the experience of watching two different individuals land in 1984 Los Angeles in order to heighten the films sense of tension? Well, toss that out the window, and prepare for an avalanche of poorly delivered exposition, as several different beginnings occur at the start of Terminator: Genisys, as if director Alan Taylor liked all these different openings and couldn't bear to part with any of them.

Despite all the chaos occurring within the first few minutes, what you really need to know is that Kyle Reese (Jai Courtney) is being sent back in time to protect the mother of John Connor (Jason Clarke), a hero in a post-apocalyptic led by evil robots. That mother is Sarah Connor (Emilia Clarke), who reveals that everything is not as it seems, as the timeline has been disrupted. Instead of being unaware of what will occur in the future like in the original movie, she has now been raised by a Terminator (Arnold Schwarzenegger) who has alerted her of everything that is to come.

Things get only more complex from there, with Nexus points, a piece of 2017 technology known as Genisys and a cameo from evil Matt Smith all factoring into the plot. At some points, Terminator: Genisys just becomes incoherent, especially since the presence of time travel only further clutters the plot and leads to more plot holes and logical fallacies than you can shake a stick at. Such story missteps may at least be more tolerable if the cast was entertaining, but, as you can likely tell from the tone of this passage, I didn't find most of the stories personalities to be at all compelling.

Jai Courtney receives a lot of hate on the internet, and I'll freely admit that I've dropped a number of jokes aimed at him in my time. His role here isn't gonna help stop the cavalcade of criticism he's received in his career, as his interpretation of Kyle Reese isn't so much poor as it is forgettable. There's really nothing to his character besides a desire to revisit his childhood home, and since he's the audience surrogate for much of the motion picture, it becomes aggravating to watch him lack any sort of distinctive qualities. Emilia Clarke better on the acting front, but her turn as Sarah Connor is severely hindered by a script that doesn't seem to realize that her character arc is potentially very very interesting. The movie sets Connor up as a person wanting to blaze her own trail after learning about her own destiny, which sounds like it could be good in theory, but gets undermined by the fact that she winds up just fulfilling her destiny anyhow.

At least Arnold Schwarzenegger returns to easily his most famous role with a refreshing sense of spirit, lending the movie its most humorous moments in the dichotomy between him and Sarah. Even just watching him try to smile got a chuckle out of me, and I would have gladly just watched a movie with him trying to blend into conventional human life. Hell, an off-hand mention to him having a job at a construction site sound infinitely more interesting than the plot of this movie, which soon dissolves into a muddled excuse to have Arnold fight an evil robot.

That evil robot (whose identity the trailers, posters and TV commercials spoil, but I'll rise above that marketing and keep things spoiler free) has a diabolical plot revolving around the aforementioned Genisys technology. That piece of hardwire allows the film to criticize the audience for being on their phones too much (man, between this, Tomorrowland and Jurassic World, this summers blockbusters are really becoming contradictory two hour lectures on how moviegoers suck, huh?) while simultaneously begging the audience to like the movie on Facebook and tweet out the hashtag #terminatorgenisys. It's this sort of lack of awareness, stretching from the characters to the dismal plot, that handicaps Terminator: Genisys from even becoming just watchable. On the plus side, at least Arnold and J.K. Simmons (who has the best line of the entire movie, involving robots covering their tracks) are around in this thing, though there are far far better movies with those two you could watch instead of this dreck.
Posted by Douglas Laman (NerdInTheBasement) at 8:47 AM