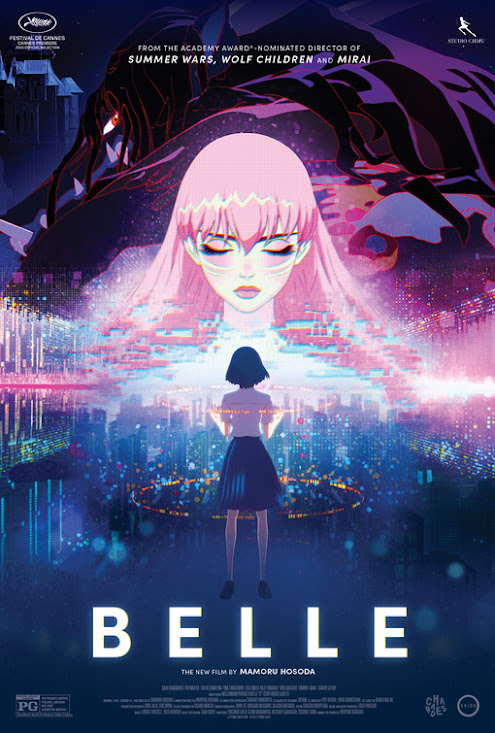 This will be a real quick review since I'm juggling Sundance Film Festival obligations and the start of a new graduate school semester right now.

This is an awesome movie! What especially struck me about Belle is that it's one of the few movies that seem to "get" the internet, its inherently chaotic nature, and how to properly reflect that in a film. Projects like Ralph Breaks the Internet keep trying to tether the inner workings of the internet to a parallel to recognizably human environments like your average workspace or a library. But within the social media service U, it's just mayhem, avatars speeding along the screen without any rhyme, reason, while the closest thing to "protectors" this domain has can appear at any moment. There's randomness here, not to mention a leaning in into the inherently stylized nature of animation, that captures the unpredictability of navigating an average day on the internet.

It's also fascinating to see the various animation styles collide within the domain of U, which also functions as a great visual manifestation of the variety of people and perspectives you can encounter on the web. It also makes for a great contrast with the real world, which is coated in a singular visual scheme and a more restrained color palette. These sequences strike a fine balance between emphasizing a sense of normalcy without sacrificing an ability to conjure up well-blocked shots or evocative imagery. Much like Sean Baker or Lucrecia Martel, writer/director Mamoru Hosoda understands that conveying a sense of everyday reality doesn't mean you have to throw out your ability to create interesting imagery.

One of the stealthily impressive parts of Hosada's screenplay comes from how the well-rounded nature of the supporting characters sneaks up on you. It isn't until the final half-hour arrives and everyone converges together to help fulfill one goal that I realized just how enjoyable everyone from the protagonist's adult lady friends to a himbo classmate was. Making this many characters seem engaging while juggling a deeply personal central story about coping with past trauma, not to mention incorporating all the fantastical elements related to the U universe, makes Hosada's writing here truly exceptional.

Best of all, it's cool to get a movie about the internet that see's the potential for this tool to bring people together. There are obviously insidious parts about the internet, particularly when big corporations like Facebook turn a blind eye to festering swamps of white supremacy. But the internet can also be a wonderful way for people to bond, to discover new interests, and to bring out new parts of yourself. Belle is conscious of the darker parts of the internet experience, but it's also an ode to all the possibilities that exist within the realm of the online. Such possibilities are explored through thoughtful writing and extraordinary animation to make for a remarkable viewing experience.